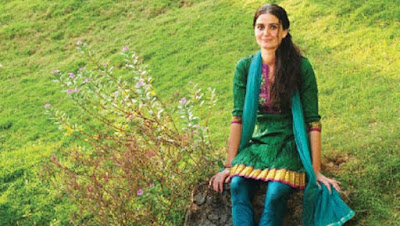 Monica chanced upon Bharatanatyam when she saw a performance by Alarmel Valli at the Khajuraho Dance Festival. | Express Photo by BP Deepu


Twenty years ago, when Monica de la Fuente first came to India, she did not have any inkling about the country or its ethos. Today, as one of the founders of an Indian cultural centre in Spain, with an impressive repertoire as an Indian classical danseuse, Monica is a name that resonates on the international dance scene.
Her dance school, ‘Kalasangam’ in Spain is one of the first Indian institutes in Spain which is recognised by the government. Monica teaches Bharatanatyam, Kathakali and Flamenco to Indian and Spanish children. “My dance school does not specifically teach one form,” says Monica. “One day I might teach them the basics of Bharatanatyam and on another, the nuances of Flamenco. There are many adopted Indian children in Spain and I have around eight who want to learn about their culture and tradition.” Once she finds them adept in whatever she teaches, she urges them to go to India and learn more.
The 39-year-old danseuse chanced upon Bharatanatyam when she saw a performance by Alarmel Valli at the Khajuraho Dance Festival in 1994, while she was on a summer vacation with her boyfriend, later husband Guillermo Rodriguez Martin. A theatre aficionado, Monica got hooked on to Bharatanatyam, where unlike similar dance forms around the world, the expressions are as important as the steps.
“Alarmel directed me to Kalakshethra at Chennai where I learnt the basics of Bharatanatyam from Meena Raman,” says Monica. “I called up my mother and told her that I was joining Kalakshethra and will not be coming back anytime soon.” In the end, she stayed four years. Later, Monica discovered Kathakali in one of her travels around South India. Her decision to learn Kathakali, a much more expression-oriented art form, was impulsive. She not only gained a scholarship from Spain but also from the Indian government to pursue her love for the dance form.
“But there were many who felt that I should stick to Bharatanatyam and learn it thoroughly, but I felt it is necessary to learn Kathakali as it is an art form that gives expressions its due,” says Monica, who came to Thiruvananthapuram recently and joined the Margi Kathakali Centre to expand her knowledge.
Meanwhile, Monica’s husband, Guillermo, who has done his Phd from Kerala University, founded an Indian Council for Cultural Relations centre in Valladolid, Spain, Casa de la India in 2003. Since then, Monica is in charge of the performing arts of the centre and has been conducting various festivals. At one such festival, she met Carnatic fusion singer Ravi Prasad, who hails from Kerala, but is settled in Toulouse, France, for the past 30 years. They found a method to incorporate flamenco and Carnatic art-forms and give breathtaking fusion performances.
“Ravi Prasad has experience in singing Flamenco music,” says Monica. “I invited him to do a play based on the Ramayana. He provided the music for that. We performed at the Thrissur School of Drama. Later, he would sing Spanish Flamenco music to which I did Indian-style dancing. The performances were more out of impulse than practice. Ravi has an amazing base in music so he can adapt to any style. We have been performing together for the last 10 years.”
Publicado por Monica de la Fuente Danza en 2:33